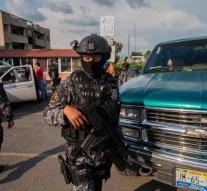 - Mexican police have found again twelve corpses that were buried in the dangerous reputable state Guerero. Tuesday, seven bodies were found Wednesday and another five. Mondays were found nine decapitated men near Tixtla. Their bodies showed signs of torture. In Teloloapan, 180 kilometers away, were then discovered three victims.

In the province of Guerrero implement drug cartels war among themselves for smuggling routes include heroin and cocaine. In the same state disappeared in 2014 43 students under mysterious circumstances.