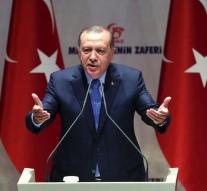 ankara - Turkey, on Friday, a day before the anniversary of the failed coup a year ago, fired more than 7000 government officials by decree. These are mainly police officers, civil servants and academics. The purification of the state apparatus ordered by the government of Erdogan after the coup of July 15, 2016, received the next succession.

After the attempt to kill Erdogan, in Turkey, 150,000 people are relieved or suspended from their job. About 50,000 others, including many soldiers, police officers, teachers, judges and journalists, have been arrested for suspicion of involvement in the pit. It claimed more than 240 lives, especially among the civilian population.

The newest dismissal round took more than 2300 police officers, including some high in rank. At the universities in the country there were three hundred employees on the streets this time. The regulation also stipulated that nearly 350 retired soldiers lost their stars and stripes.

According to the Turkish authorities, the driving force behind the coup is the US-born spiritual Fethullah Gülen. This denies the allegations.