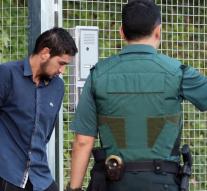 madrid - A Spanish court decided on Thursday to release a second of four detainees arrested in the terrorist attacks in Catalonia. Salh El Karib is released under certain conditions.

El Karib had an internet cafe in the northeastern Spanish town of Ripoll, where most members of the terror cell came from. Research judge Fernando Andreu had asked him to hold on pending further investigation into his possible role in last week's attacks, so that in Barcelona and the coastal town of Cambrils, fifteen people left.

El Karib has to hand in his passport and report to the court every week. The court ruled that there is not enough evidence to keep him in custody.

Another suspect arrested in connection with the attacks, Mohamed Aalla, was released earlier this week earlier. Two others are still accused of membership of a terrorist group and murder.