Home / World / Another embassy in Jerusalem 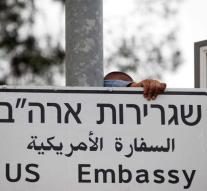 asunción/jerusalem - Paraguay moved its embassy in Israel from Tel Aviv to Jerusalem on Monday. It is after the United States and Guatemala the third country to take the controversial step.

The president of the South American country of seven million inhabitants, Horacio Cartes, traveled to Israel for the official opening of the embassy in Jerusalem. Israeli Prime Minister Benjamin Netanyahu was also at the opening.

The status of Jerusalem plays a key role in the struggle between Israelis and the Palestinians who claim East Jerusalem as their capital. Israel conquered the east of the city in 1967 and stated in 1980 that all of Jerusalem is 'the eternal, indivisible capital'. Virtually no country recognizes this and the Netherlands immediately moved its embassy to Tel Aviv in that year.

For the United Nations, East Jerusalem is occupied by Israel, which must be returned on the basis of a Security Council resolution. Foreign embassies are therefore normally not in controversial Jerusalem but in Tel Aviv.