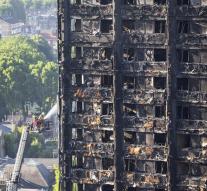 london - More than 65 people will be missing in a London apartment building after the big fire. The British tabloid The Sun has published a list of names.

It is feared that they were killed.

Research in the burned out can take months. Police Commissioner Stuart Cundy said that Thursday. He also said he hopes that the number of victims will not rise to 'a three-digit number.' The number of people killed by the fire has risen to seventeen on Thursday. Previously, the London police reported another 12 deaths.

Prime Minister Theresa May visited the site of the burned-out building. She has officially investigated the fire. Labor leader Jeremy Corbyn also visited London and spoke to residents of the flat.