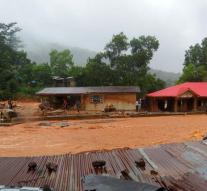 freetown - After the earthquake and mudflows in Sierra Leone, according to the Red Cross, only six hundred people are missing. Local media reported that more than 350 people were killed, including more than one hundred children.

Heavy rainfall in the West African state led to major mudflows at the capital Freetown on Monday. The authorities fear that there are many more victims in the thousands of homes diverted. The mudflow occurred when parts of a soaked hill began to slide and began to slide.

Rescue workers are engaged in race against the clock to save more victims. The area is still very vulnerable, says the Red Cross. 'There is still a danger to residents. '' The relief organization encourages remaining residents to leave the area.