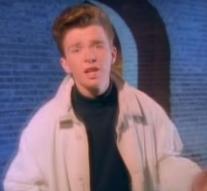 - Hackers collective Anonymous has recently taken up the digital weapons to wage war against ISIS. One of the new campaigns in this cyber war is about ' Never Gonna Give You Up' singer Rick Astley.

The collective sport pro-ISIS hashtags on social network Twitter and flooded it with spamtweets links which suggests that the site in question is interesting for supporters of the terrorist movement. If the link is opened, however, it appears to be the video of Astley popular number.

The practice is not new : the so-called " Rick Rolling " has been done since 2007, but it was never used against a terrorist group. The aim is therefore to ensure that the used hashtags are useless and spreading ISIS propaganda via Twitter becomes more difficult.