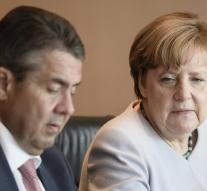 ankara - It is unacceptable that the German government rejects the idea that Turkish President Erdogan is speaking in Germany. This shows once again that Berlin measures two dimensions, a spokesman for the Turkish Ministry of Foreign Affairs said Thursday.

The German Foreign Minister Sigmar Gabriel has stated that Erdogan can not speak to Turkish Germans in the margins of a summit of the G20, 7 and 8 July in Hamburg. Erdogan had asked for permission.

The Turkish spokesman also referred to the German Social Democrat foreman and ex-President of the European Parliament, Martin Schulz. 'The man who has presided over the European Parliament also shows the true face of the double standard,' which is always used against Turkey. Schulz had earlier called Erdogan, 'an autocratic ruler'.