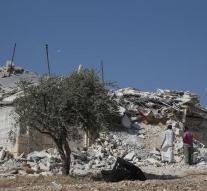 ankara - Turkey knows nothing of an agreement between the Turkish army and militias of the Kurdish rebels in Syria. Which emphasize Turkish ministers Wednesday.

Tuesday reported the rebel group that there was an agreement on a ceasefire to spare civilian lives. According to the Pentagon had given the rebels largely,, '' to respond to the American demand for a cease-fire, but Turkey said Tuesday it at all.

Omer Celik Minister for European Affairs said an agreement with a terrorist organization and thus negotiate 'unacceptable'. He stressed that the struggle against extremists, not against Kurds in general.


The United States want the Turkish army stops fighting not against Islamic State. The Turks left soon know that there is not gone in that desire: 'Nobody has the right to tell us what terror we can and can not fight,' said Celik.

Turkey and its allies among the rebel groups in northern Syria in recent days around Jarablus and Manbij embroiled in fierce fighting with Kurdish rebels. Turkey demanded that they withdraw behind the river Euphrates.

In the northern Syrian city Jarablus Turkey fights against militants of Islamic State (IS).