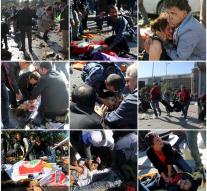 ankara - The death toll from the bombing at a train station Saturday in the Turkish capital Ankara has risen to 86. According to Minister of Health Mehmet Muezzionglu there by the explosion 62 people died . 24 other deceased in the hospital.

About eighteen people are still operated and 28 victims are in intensive care unit of a hospital. This was reported by the newspaper Hurriyet based on statements from the minister.De explosion took place in a place where a peace march was about to begin. Supporters of Kurdish and pro - Kurdish parties and organizations gathered to protest against the armed conflict between Turkey and the fighters of the Kurdish PKK.

According to the Turkish authorities, a suicide bomber blew himself with a bomb belt op.Getuigen in the location found metal balls , which are often used in homemade explosives. The attack is still unclaimed. Local media and witnesses reported a second explosion just after the attack.