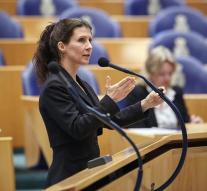 the hague - The Animal Party wants a debate about the egg crisis next week. The party calls on the Lower House on Wednesday to come back from the summer trip.

The animal party is furious now that the Belgian government swings with documents showing that the Dutch Food and Welfare Authority (NVWA) was aware of the antelope poultry in the poultry sector by the end of last year.

'It seems strongly that the government has ignored information,' commented Kamerlid Esther Ouwehand furieus. 'Information about public health has not come out. A political death sentence. '

It is still unclear whether the Party for the Animals gets a majority behind it. This is necessary for recalling the House of Representatives.

Wednesday morning, the Belgian parliament had already met for an emergency debate. The Minister of Agriculture drew hard to the Netherlands and came up with memoranda of the NVWA. This shows that since November 2016 there was information in our country about the use of antelope poultry in chicken farmers.