Home / World / Angry teachers in action at the Malieveld 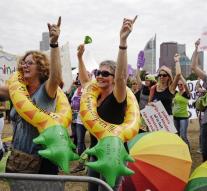 amsterdam - Angry teachers, parents and other sympathizers gathered at the Malieveld in The Hague on Tuesday afternoon. About two thousand people with purple and green hats from the trade union CNV and the General Education Union (AOB) protest against the excessive workload in primary education, too low salaries and rising teacher shortages.

The action of the evil jokes and masters is widely supported. For example, a petition on the internet has been signed over 280,000 times in a few weeks. Teachers started working on Tuesday morning by teaching an hour later. More than 5500 primary schools participated in the protest, or 85 percent of the total.