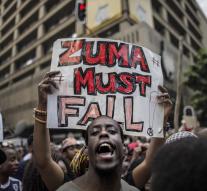 - Thousands of angry South African students Friday at the government buildings protesting against plans to increase tuition. The demonstrators tried fences around the buildings in Pretoria, where President Jacob Zuma has an office, pulling down.

The students chanted slogans and clashed with police. Who previously had additional security pending the availability of a speech by Zuma. " He does not take us seriously, we have been here a long time ", said a student on television.

Students protest across the country in a week against the planned increase in tuition fees. The riots led to the closure of all schools and universities.