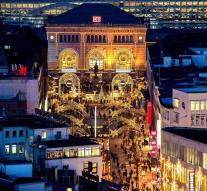 hannover - Visitors to the Christmas market in Hanover, Germany received Thursday a sinister surprise. Angry sheep dumped namely a lot of dead animals in the middle of the market in front of the parliament of Lower Saxony. They protested against thus increasing nuisance of wolves who have targeted their livestock and increasingly killing and eating animals.

Front door of the parliament building in the middle of the Christmas lay the carcasses of sheep, deer and cattle. 'Wolves disturb our future' and 'Is the wolf important than man?' Was written on banners around the pile.

The wolf is a protected species in Germany. But the sheep require measures to be finished at the inconvenience and want aggressive wolves. The wolves are found to be less afraid of humans.

According to the Ministry of Environment in Lower Saxony sheep farmers can better protect.