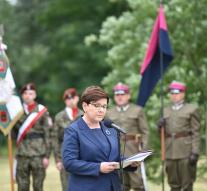 warschau - Polish Prime Minister Beata Szydlo has taken the rage on her neck by a speech she held in the former Auschwitz destruction camp. She said that Auschwitz teaches in the present times that you must do everything to protect the lives of your citizens. This has been interpreted directly as a criticism of European refugee policy.

Szydlo immediately received criticism from Donald Tusk, Polish President of the European Council. 'A Polish premier should never ever pronounce such words in such a place,' he told Twitter. In his own country, Katarzyna Lubnauer opposed Nowoczesna's opposition party, used to use the atrocities committed in Auschwitz for her anti-refugee campaign.

The Polish Prime Minister defends the remark that her statements have been broken out of their context and interpreted incorrectly. Poland belongs to the Czech Republic and Hungary to the countries that the European Commission wants to address legally for their refusal to allow refugees from Italy and Greece.