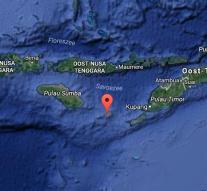 sawu - An unknown man who probably has put a number of primary school pupils on the Indonesian island of Sawu was beaten to death by a mob. That happened at the police station where he was detained. That report local media.

In the early morning, around 09. 00 pm local time, seven students of a local elementary school were stabbed by the man. It is not known what the exact age of the victims. On the basis of pictures floating around on the Internet, you can see that it is likely that students of upper primary school. The injuries are mostly in the neck and the head of the children.

Shortly after the attack, the suspect was arrested by the citizens. They handed him over to the police. Two hours later, thousands of residents gathered outside the police station. The police officers, who were by far in the minority, were overwhelmed by the angry crowd. After they got the alleged perpetrator from the cell, they beat him to death. How people have gotten the alleged perpetrator from the cell, is not clear.

The suspect would be a resident of Bekasi in West Java. It is not yet known what the motive of him and whether there is a religious thought behind it. Religious leaders emphasize local media know that peace among the different faiths must be preserved on the island.