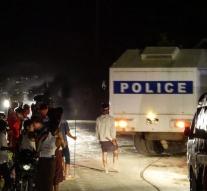 sittwe - Hundreds of protesters tried to prevent aid in Myanmar from being delivered. The angry Buddhists believed that the aid was intended only for Rohingya Muslims.

Red Cross employees were busy on Wednesday to load some 50 tons of relief goods aboard a boat in the city of Sittwe when they were approached by the crowd. The bystanders wanted to know what the emergency workers were doing. When the situation escalated, about two hundred agents had to intervene.

The protesters threw fire bombs in multiple sources and were armed with sticks in some cases. Agents shot in turn to expel the crowd. They definitely arrested eight people. The Red Cross revealed that none of its own employees were injured.

With helpers in neighboring Bangladesh, Thursday was less successful. There were certainly nine people killed when a truck with auxiliary Rohingya arrived in a trick, made the Red Halfman known. The victims were hired forces who had to divide the items.