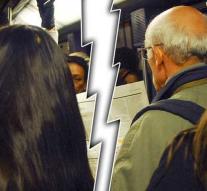 brussels - A 100 percent Muslim state and men and women must travel separately on public transport. The Belgian party Islam comes with controversial plans in the run-up to the municipal elections in the autumn. This to anger of voters and other politicians. 'No sharia. Not now. Never ever.'

At the local elections in 2012, two council members were elected, both in Brussels municipalities: Anderlecht and Molenbeek. But Islam has bigger ambitions for this year and wants to participate in 28 Belgian municipalities (in the Brussels region and Wallonia) and have at least one candidate elected everywhere.

According to Redouane Ahrouch, municipal councilor in Anderlecht and treasurer of the party, a 100 percent Islamic Belgium is the ultimate goal. 'Although we do not mean that we want to oblige the headscarf, for example,' he says in Het Belang van Limburg.