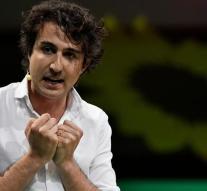 the hague - Politicians are outraged by a Jesse Klaver documentary that will be broadcast on public broadcasting next month. It's about a movie of almost an hour, broadcast in normal programming, outside of the broadcast time for political parties. It is politicians in The Hague that broadcaster Bnn-Vara issues tax money on what they regard as political propaganda.

For the director of the film, it was two times cash. He first turned into the service of GroenLinks and received a fee from the production house for assembly. The film Jesse follows Klaver in the election campaign this year.