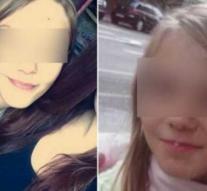 lille - The 13-year-old Angélique Six, who was found dead in a forest on Sunday, was murdered by her former neighbor. David Ramault (45), a convicted sex offender, has known that he has sexually abused the girl and killed her.

Ramault knew the victim and her family because he lived in the same building until two years ago. He would have lured the girl- who trusted him- to his home where she was forced into sexual acts. He then strangled her with her own trousers, as the French court announced on Monday after interrogation.

For days a large group of people searched for the girl who disappeared on Wednesday. Ramault was arrested after a neighbor boy indicated that Angélique had joined the 'older man'. The man was arrested and known immediately. He said during the interrogation that he had buried her body in a forest near the French village of Quesnoy-sur-Deûle.

Local residents are in shock, French media write. 'We knew him well and lived in the same building. At first I could not believe that he was the perpetrator. He seemed a nice and caring man and worked as a bus driver, 'said a 29-year-old local resident.

Ramault, father of two children, was convicted in 1996 for robbery and rape under threat of a weapon. After murdering Angélique, the man would have written letters for his wife and children in which he talks about 'impulses'.