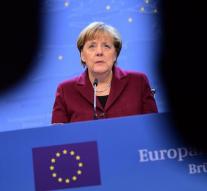 berlin - Chancellor Angela Merkel (CDU) is in mourning following the events at the Christmas market in Berlin, in which twelve people died and dozens were injured. She set include her Facebook page on black.

The German Chancellor has responded to the events in the following words: 'We mourn the dead and hope that the injured can be helped. '

Merkel is in close contact over the events with German Interior Minister Thomas de Maiziere (CDU) and the Berlin Mayor Michael Müller.