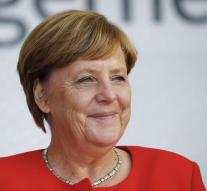 berlin - A Syrian family has called their newborn daughter, 'Angela Merkel Muhammed', thanks for the generous refugee policy. The original is not the name.

'With this decision, parents want to express their gratitude to the Chancellor,' says a spokesman for the St. Franziskus Hospital in Münster.

The parents of the new Angela sought their salvation in Germany in 2015, in the midst of the refugee crisis. At that time they already had four children. Merkel has always welcomed refugees with generous welcome. Her statement, 'Wir schaffen das', became a spectacle. Later there was a lot of criticism because the head of state refused to limit the number of refugees.

Mother Asia and father Khalid are not the first with an 'Angela'. In February 2015 Angela Merkel Ade was born. Her Ghanaian mother wanted to show her gratitude for the three-year residence permit. Also the Syrians Mamon Alhamza and Tema Alhamza named their daughter in Merkel in January 2016.

How many Angela's are now walking in Germany is not known.