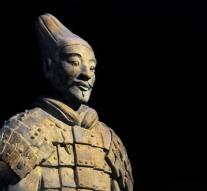 london - China and the West were already in contact with each other before the opening of the Silk Road. Chinese archaeologists establish a documentary of the famous Terracotta Army of the first Chinese emperor Qin Huangdi, who lived in the third century BC, based on Greek sculpture. They suspect therefore that the Chinese sculptors who made the thousands of images, are taught by Greeks.

The Greek influence in Central Asia is well known. After the conquest of Alexander the Great established the Greeks are in the area where countries such as Afghanistan and Kyrgyzstan. The city of Kandahar for example, is one of the many Alexandria that have been founded by the Greek general. The culture of the Graeco-Bactrian kingdom had in any case affect the area we now know as Pakistan and northern India.

So it's not so strange to assume that this effect is also valid in China do. It is only to be seen whether they were actually Greeks who inspired the creators of the Terracotta Army, or Asians who were taught in turn by Greek sculptors.

In the British documentary there opposite that in archaeological excavations in various places in western China Western dna was found. On that basis, the archaeologists concluded that there were actually Greeks in this region.

That skeptical reacted to the news of Chinese archaeologists, is not so strange. About the contacts between the West and the Far East to do in the classical period include many myths the round.

There is a famous legend about a Roman legion that would have ended in the first century BC in China. These legionnaires would have been part of the Roman army was annihilated by the Parthians at the Battle of Carrhae. The Romans would have settled after their flight in China and there have existed up as mercenary. However, the chance is very small that it actually happened.\n  \n  \n   advertisement

The Romans and Chinese, moreover, were indeed in contact with each other, said indirectly. The Silk Road originated in the first century BC and was, as the name suggests, to the sixth century AD, the only way the Romans and later the Byzantines could come on side. Only when a few monks smuggled silkworms from China, the West could provide his own side.