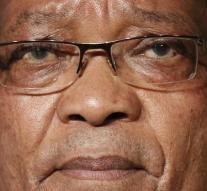 johannesburg - South Africa's ANC party has emphatically Wednesday behind leader and President Jacob Zuma (74) rallied. This happened despite the calls for his resignation from the public and some allies after Zuma among others nine ministers uitstuurde the avenue.

Especially the resignation of Finance Minister Pravin Gordhan Zuma was deemed to be critical. The minister was seen as a stable factor for many foreign investors. The largest trade union in the country, Cosatu, Zuma called on Tuesday to resign. The union has always been an important partner of the ruling party ANC.

The Secretary General of the ANC Gwede Mantashe Wednesday, however, stated that the ANC did not send away to Zuma thinks. Zuma's term as party chief ends in December. His term as president ends in 2019.