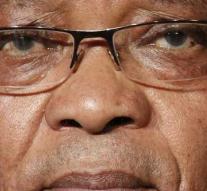 johannesburg - The summit of the South African government party ANC (African National Congress) meets Monday to talk about President Jacob Zuma, who was controversial because of corruption scandals (75). The party reported on Sunday that there is a special meeting of the party management. That can instruct the president to resign.

The scheduled meeting is Monday and is expected to be about Zuma's departure. He was pushed aside as party leader in December and succeeded by Cyril Ramaphosa (65). He said he had 'constructive talks' with Zuma last week 'about the transition (to another head of state) and the position of the president of the republic. 'Ramaphosa would succeed Zuma.

How far the ANC is with 'the resignation' of Zuma did not become much clearer on Sunday when Ramaphosa spoke. That was at a meeting in the context of the celebrations this year of hundredth birthday of ANC hero Nelson Mandela (1918-2013).

Ramaphosa said he understands that people want to have this behind them. He said the party board talks about the transfer of power on Monday. But he also said that the transfer of Zuma's power to his successor must be 'very cautious and efficient' in his work. He did not say when Zuma is leaving. His term of office as president ends in mid-2019.

The many corruption scandals surrounding Zuma and the increasingly turbulent economy would threaten the survival of the ANC as a dominant people's party.