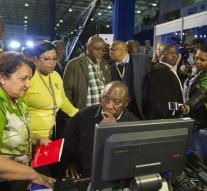 - After Cape Town and Port Elizabeth, the ANC loses power in Pretoria and surrounding areas after the local elections. According to the state news agency of South Africa's opposition Democratic Alliance (DA) as the largest of the bus arrived in the metropolis Tshwane, where the administrative capital Pretoria is the heart of.

The ANC ruled South Africa since 1994 without a break, but the power of the movement continues to show more cracks. Cape Town was already lost in previous local elections and now follow more major cities. Only in Johannesburg, the ANC remains possibly the biggest party. Saturday there was still counting approximately 10 percent of the vote, but the preliminary results, the party remains the main competitor DA just before.

DA received in Pretoria 43.1 percent of the vote, against 41.48 for the ANC. The radical left EFF received 12 percent of the electorate behind him. Since no one has a majority, a coalition will be forged.


The supporters of the ANC among more dissatisfied with high unemployment and a lack of facilities. Corruption scandals around President Jacob Zuma to do the image of the movement, which for decades was led by Nelson Mandela, no good.