Home / World / ANC is going to release Zuma from office 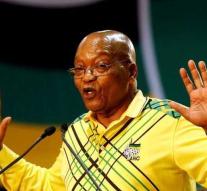 johannesburg - The South African government party ANC (African National Congress) will demand that President Jacob Zuma step down. The party top decided to release him from his position during a thirteen-hour marathon meeting, a high party source said.

Television channel SABC reported Monday that party leader Cyril Ramaphosa, the intended successor of Zuma, has given the president 48 hours to resign. According to a source from the Reuters news agency, the leader, who is troubled by corruption scandals, clearly did not intend to do so.

The ANC will give a press conference on Tuesday to make the decision of the party top public. In principle, 75-year-old Zuma can refuse to resign. The ANC would then have to put it aside by a vote of no confidence in parliament.