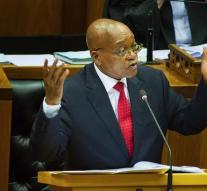 - Hart executive committee of the ANC decides possible Monday about the fate of Jacob Zuma. The 74-year-old president of South Africa is haunted by scandals. For years there have been allegations of corruption, bribery and money laundering. Not only against Zuma, but also against his wealthy family.

The party executive spoke all throughout the weekend on the case. Three members of Zuma's cabinet have openly called for the president resign. Furthermore, there is a proposal for an official censure motion on the table, made by the Minister of Tourism, Derek Hanekom.

The executive committee is meeting in Pretoria, the administrative capital of South Africa. The board has the power to put Zuma from the party. Reportedly expired discussions about the fate of the president 'heated'.