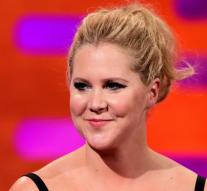 - Armin van Buuren is no longer the most dangerous star on the internet. The annual McAfee Most Dangerous Celebrities list is the Dutch DJ dethroned by comedian Amy Schumer, Intel reported.

Search for Schumer could lead most often according to the computer company to risky sites. In 16 percent of the search run online danger and can for example get a virus or malware with a click. Van Buuren is a lot safer compared to last year. He has completely disappeared from the top ten.