Home / Tech / Amsterdam has most 'zombies' 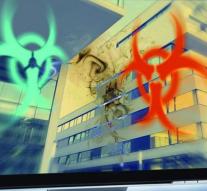 utrecht - In the Netherlands, Amsterdam has the most 'zombies' infected computers and devices by viruses that are deployed as part of a botnet. That virus fighter Norton quantified.

After the capital follows Utrecht and Amersfoort. Naaldwijk and Rotterdam are also in the Dutch top five. It is the first time that the number of devices used to cities is calculated by botnets.

In the Netherlands there is an infected machine on every 3389 internet users. '' The size of a bone-population depends on several factors. Cities with high internet speed are major targets for cybercriminals because the devices connected via the Internet provide lucrative sources of bandwidth, '' explains Robert den Drijver, chief Benelux Norton out.

Incidentally, the location of a said device infected anything about the origin of the infection and the purpose of the botnet. '' An infected device could contribute in Europe to attack in Asia, driven by eg a cybercriminal in North America, '' explains The Tracker.