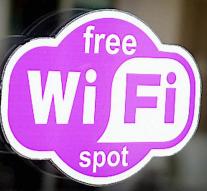 amsterdam - The City of Amsterdam is investigating whether it can get free Wi-Fi in the capital. To that end, consultations between the city government and Internet companies, the SP announced in Amsterdam on Thursday. That party took the initiative for the free wifi.

According to a motion filed by the SP is first 'opportunities with major Internet companies explored for free public Wi-Fi hotspots. ' The end of 2016 there will be a report in response to the survey.

SP councilor Tiers Bakker called Internet '' a major utility. ' 'Superhighway' 'Just like the road network would 'therefore be free for everyone. '' Bakker points out that more and more cities have some form of free Internet remains for their residents and Amsterdam.