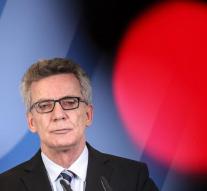 berlin - German Interior Minister Thomas de Maizière is relieved about the death of terror suspect Anis Amri. His is no danger from now, the minister said. 'But unfortunately the end of the raid does not change the threat level in Germany. That remains high and the authorities remain vigilant. '

De Maiziere thanked the Italian authorities and in particular the two agents Amri asserted. The Tunisian shot one of them in his shoulder, which the other agent shot and killed the man who probably committed the attack on the Christmas market.

His colleague Justice Heiko Maas announced that lessons must be learned from the attack. 'It's mainly the questions of how people who are obliged to leave the country may be expelled as soon as possible and how people who are a danger can be better monitored. '