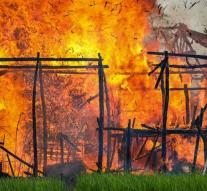 A spokeswoman from Amnesty called the shocking and myanmar burden proof that violence has stopped and that many Rohingya 'have no more homes to return. '

The organization therefore contradicts the Myanmar leader Aung San Suu Kyi. She declared last week that the country is safe and that hundreds of thousands of Rohingya refugees were welcome to return from neighboring Bangladesh. It is estimated that more than 400,000 Rohingya fled because of the continuing violence by the Myanmar Army against the Muslim community.