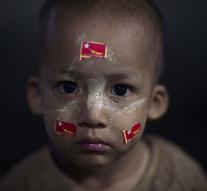 london - In the run up to the elections are peaceful activists arrested in Myanmar minorities suffer discrimination and freedom of speech is restricted. That said Amnesty International Thursday, three days before the election.

Last month, certainly arrested nineteen opponents of the regime. " Voters in Myanmar go to the polls in a country where thousands of meetings between Aung San Suu Kyi to attend, but where others get prison for speaking out or protesting peacefully. The leaders may say that the country's road to reform into storage, but actually it is the restriction of freedom of expression and the right to demonstrate peacefully become worse ", represents the organization.