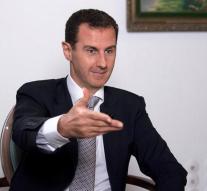 - Syrian President Bashar al-Assad on Thursday rebels who lay down their arms within three months and brought surrender amnesty in anticipation. He announced that through state media.

Syria, with Russia engaged in an offensive around the city of Aleppo, which is held for a long time rebel. Certainly 250 000 civilians trapped in the city. Russia and Syria announced Thursday that attempts are being made to get the citizens of the city via corridors. Also a possibility is being created for rebels to come out of the city and surrender.