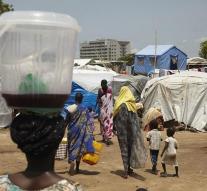 juba - Amnesty International says that the army of South Sudan has committed to the deliberate killing of civilians and rape of girls and women. The atrocities were committed in July in the capital Juba.

The human rights organization says it is high time that South Sudan is imposed an arms embargo. Countries should not benefit from supplying arms used to kill civilians. The army would also have made themselves guilty in Juba to looting.

The civil war in the African country began in 2013. The conflict has cost tens of thousands of lives, according to Amnesty. A peace agreement between the government and rebel not save it. Last summer, again broke out armed conflict.

The Amnesty International report comes just days before a mission by the African Union Peace and Security Council will visit the country.