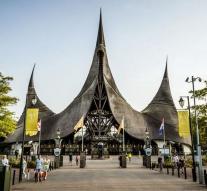 kaathehevel - The Efteling in Kaatsheuvel has been voted the best theme park in the world by the American website Themeparkinsider.com.

The Efteling thus defeated Tokyo Disney Sea. That park has been voted winner for the past six years. The site is based on ratings of their visitors. That's what the fun park site says, four million a year.

The Efteling is in her hands with the results. Spokesman Koen Sanders calls Themeparkinsider a reputable website. Against Broadcast Brabant, he says: 'What makes it special is that it's an American site. Those who do not look so often across the US border. Also, these people- like us- have not grown up with the Efteling, so we are really judged by a view of the outside. '

In the new review, the latest attraction Symbolica was not included. Visitors to the site could vote until June 30: Symbolica opened on July 1st. The 'Palace of the Fantasy' was built in a year and a half for an amount of 35 million euros. This makes it the most expensive and greatest attraction in the Efteling ever.

Anton Pieck and Peter Reijnders 65 years ago devised the fairytale forest with ten fairy tales. The park, which later evolved into the Efteling, is now receiving 4.76 million people a year across the floor.