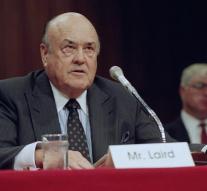 - Melvin Laird, former Minister of Defense of the United States on Wednesday in Fort Myers deceased in the state of Florida.

This confirms a grandson of Laird. The Republican was from 1969 to 1973 minister under President Richard Nixon and stood for the withdrawal of US troops from Vietnam. Laird became 94 years old.

Laird was known by the term 'Vietnamization,' which he described the policy to strengthen the forces of US ally South Vietnam in the fight against communist North Vietnam. At the same time he tried to reduce the number of US troops in Vietnam. This policy was not successful. In 1975, South Vietnam fell to the communists in North Vietnam, leaving only the Americans had to flee the country.