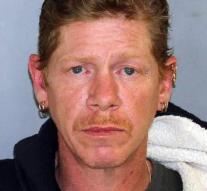 - An American is arrested because he is suspected that he had strangled his mother and then has kept her body nearly two months in the motel room where they lived. That US media reported Sunday.

Charles Cole would then his father's body " the dirt " have been dumped in a remote area some 130 kilometers away. The police called a " disturbing and unusual " case. Cole's wife, who believed that they lived in the motel, is suspected of tampering with evidence.

Police began the investigation on October 6 after a tip from family members who said they did not know where the woman was. The woman's body was found last week.

The manager of the motel told told The Poughkeepsie Journal that the suspect had left the room a few hours before the police came. According to him, there were no indications that there was a corpse in the room.