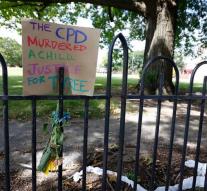 - "An American police officer shot and killed a thirteen-year-old black boy who, it turned out, a toy pistol pointed at him. The boy, Tyree King, was to have participated, according to the police suspect a robbery, so the police wanted to arrest him."

"After the shooting incident, the teenager was taken to a children's hospital, where he died of his injuries."