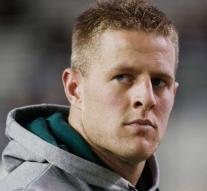 houston - The American football player J.J. Watt has pledged to pay the funerals of the ten victims of the shooting at a school in Santa Fe, Texas. That has confirmed his club Houston Texans.

On Friday, a shooter opened the fire in a classroom at the Santa Fe High School. The perpetrator used several firearms. The suspect, the seventeen-year-old Dimitrios Pagourtzis, is in custody.