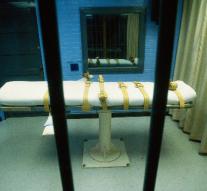 tallahassee - An American who was condemned for the stabbing death of his young daughter of five, his ex- wife and two relatives of the woman thirty years ago, was executed in the state of Florida. According to prosecutors Jerry Correl was furious with his ex- wife because she was dating again.

The 59-year-old Corel Thursday received a lethal injection. It was the second execution in Florida this year. The death penalty would actually be carried out in February, but was postponed after problems with executions. In June, the US Supreme Court approved the method properly. In Oklahoma last year the drug midazolam used as part of a lethal cocktail for the death penalty. That means is controversial because it took up to three minutes before the condemned to death actually died.