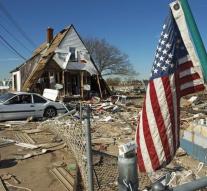 staten island - A couple from the New York state island has falsely proclaimed the government $ 750,000 after Hurricane Sandy had completely wiped their house. In fact, the couple did not live in the blown house for years.

Nagwa Elsilimy and Ahmed Arafa (both 59 years) made several emergency services and agencies wise that the house at Topping Street was their main house when Sandy was disturbed. Of the money received, they built a new accommodation. However, other residents of the same street claimed that the house had been vacated for years, writes New York Daily News. Also from court papers later appeared that the two had no longer been living since December 2009.

Mark Peters, head of the organization who oversaw the reconstruction of the city at the time, is shameful. 'While homeowners asked for help for recovery and reconstruction, the suspects smashed out the destruction. They benefited from benefits they were not entitled to and used government money to restore a home they did not live in. '

If Elsilimy and Arafa are found guilty, they hang up to thirty years imprisonment above the head.