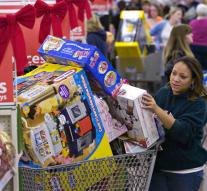 Of that huge amount 3.3 billion was spent online in early smashed Christmas presents, ranging from Lego and Barbie dolls to iPads, 4K TVs, drones and electric scooters. That's a record. Spending via mobile devices grew Friday by 33 percent to an all-time high of 1.2 billion.

Spending over the internet were at the expense of the traditional shops of brick, concrete and glass but not dramatic. Sales fell according to the specialized data provider ShopperTrak by 1 percent compared to 2015.