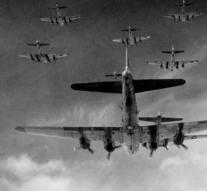 - A relatively intact wreck of an American B-17 bomber from the Second World War has been discovered at the bottom of the North Sea. Human remains have also been found.

Flemish media report that. The discovery was made during the construction of a high-voltage cable connection between Belgium and Great Britain.

The bomber was deployed massively during the Second World War for attacks on German industry and large cities. 9-10 people could be seated in the aircraft.