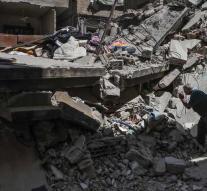 amman - A bomb from an American plane killed a Syrian army officer close to the Iraqi-Syrian border in Tanf. An officer has said this to the Reuters news agency.

The Pentagon reacted quickly to the allegation and denies that a bombing has been carried out. According to the US military command, a militia backed by the United States on Thursday night has been stopped by 'unknown enemy soldiers'. The unknown soldiers have been chased away, according to the US, where no casualties have fallen.

Tanf is located in the Badia region, near the border with Iraq. The region consists for a large part of desert.