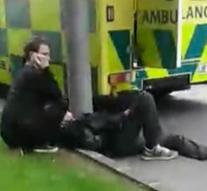 auckland - An ambulance has ensured that three people- involuntarily- ended up in the hospital. The trio was Wednesday waiting at a bus stop in the New Zealand city of Auckland when the ambulance they drove up, said local media. Luckily the bus stop in front of the Auckland Hospital.

The ambulance was on the way to hospital, but did not use a siren or flashing light. The orderlies and patient in the car were unharmed, police reported. Which still has no clue about the cause of the bizarre accident.

The injuries of the people at the bus stop turned out better than expected. The ambulance service they showed all three neatly by ambulance to the hospital to transport the corner.

The ambulance comes to rest against a pole of a bus shelter.