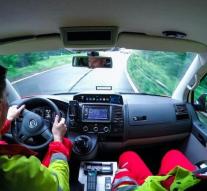 hamburg - A 29-year-old man died in German Hamburg after being injured by an ambulance. The hospital was on the way to an emergency when the accident occurred with a floodlight and siren.

The victim was created when he crossed a traffic light. The crew of the hospital gave first aid but the pedestrian died later in the hospital. It is not clear why the man did not hear the hospital coming.