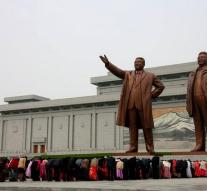 kuwait - Kuwait has ordered the ambassador of North Korea to leave the country within a month. That said a North Korean diplomat in the Gulf region. The Kuwaiti measure is in line with the policy of shutting down relations with Pyongyang because of the continuing rockets and threats with nuclear bombs.

The United Nations Security Council decided to impose new sanctions earlier this month and break the United States's call on diplomatic and financial ties with Kim Jong-un's regime. President Donald Trump repeated that recently during a meeting with leaders of the Gulf States in Washington.