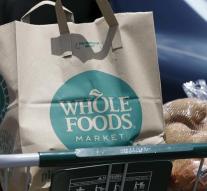 The United States Competition Watch dog, the Federal Trade Commission, agrees with the takeover. This amounts to $ 13.7 billion, converted to € 11.6 billion.

It is Amazon's biggest acquisition ever, the world's largest online store. The company enters into the world of physical stores. Whole Foods, focusing primarily on organic and healthy foods, has over 460 branches in the United States, Canada and Great Britain. There are about 87,000 people working and the chain is good for an annual turnover of 16 billion dollars.

Amazon has been working for a while to get to the ground in the supermarket world. For example, the company has a state-of-the-art test store in downtown Seattle without cashiers and employees. The supermarket is equipped with special self-scanners. If someone gets a product from a shelf and stops in a bag, it will be recorded in an app. When leaving the store, the amount due is automatically deducted from the customer's account.

Amazon also has its own service to deliver groceries, AmazonFresh, and some 'bricks' bookstores.